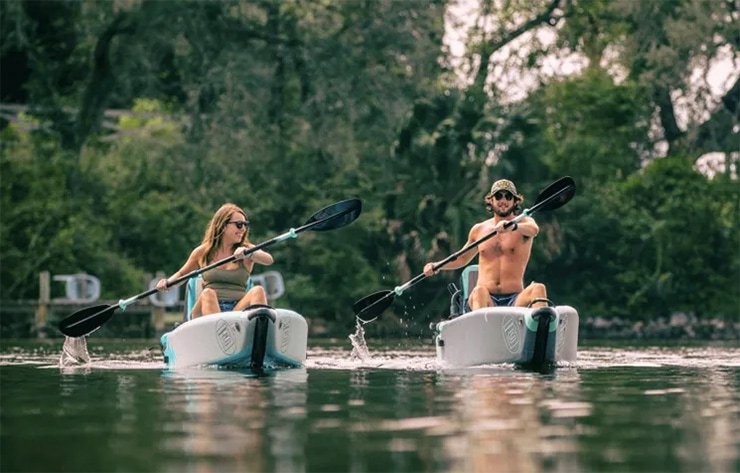 Move over cheap inflatables, today’s inflatables aren’t your ordinary pool toys. Over the past couple of years, recreational companies have stepped up their inflatables game.

But could an inflatable really be your next favorite kayak to take out? Today, we’re going to take a look at what makes inflatables such a great substitute for traditional hardshell kayaks.

So, are inflatable kayaks good? Read on and I’ll answer that question.

Are Inflatable Kayaks Good for Stability?

Inflatable boats are incredibly stable. Unlike traditional hardshell kayaks, inflatable kayaks tend to have a wider base. Their wide base offers a lot more surface area that results in a more stable boat.

If you’re a first-time kayaker, you might feel a little unstable in an inflatable kayak because the inflation gives a bit of pushback when you first sit in. However, once you get used to using an inflatable kayak or inflatable boat, you’ll generally feel that sense of stability the more you row.

Also, because inflatables generally sit higher on top of the water, this gives you an added sense of stability as you paddle too. For new kayakers, paddling in a sit on top kayak also offers a little bit more peace of mind as it feels though you have a bit more control.

You may also like: The difference between inflatable boats and inflatable kayaks.

Is an Inflatable as Durable as a Hardshell Kayak?

Traditional hard-shell kayaks are incredibly durable. They’re usually made out of a plastic, fiberglass, or composite material like Kevlar. While hard shell kayaks can be incredibly durable and resistant to punctures and scratches, believe it or not, some of the best high quality inflatables can offer a similar level of durability.

Traditional entry level kayaks are typically made out of a PVC material. This PVC material is flexible thanks to the nylon or polyester fabric coating.

The best and more durable inflatables are made out of hypalon. Hypalon is a synthetic rubber that features a nylon or polyester coating on it. Hypalon is extremely durable because it can withstand temperature, and is UV resistant.

One of the biggest misconceptions is that inflatable kayaks are not safe. This couldn’t be farther from the truth. The best kind of inflatables are the ones that feature three separate air chambers.

These separate air chambers lend really well to safety because if one air chamber sustains an air leak, the other two will keep you afloat. Even if you spring an air leak while you’re out on the water, you have a fairly good chance of being able to contain the leak, do a temporary fix, and then paddle back to shore.

Also read: What size kayak do I need?

Related: How to get in and out of a kayak.

There are some really amazing inflatable kayaks meant for fishing. Bote inflatables has an awesome lineup of some awesome fishing accessories that go on their Inflatables.

One of their standout inflatables, the Bote LONO Aero Inflatable Kayak, does a remarkable job of providing kayakers with ample space, stability, and options when it comes to fishing accessories for a kayak. Leading models like this can give hard shell fishing kayaks a run for their money.

Inflatable kayaks can sometimes be the best option if you’re looking for a quality built touring kayak too. Touring kayaks tend to be a lot longer and narrower. Because of this, hard shell touring kayaks can be really cumbersome to transport.

Inflatable touring kayaks like the Sea Eagle Razorlite not only provide you with the features of a quality touring kayak, but they make transport a breeze.

Plus with features like a removable skeg and an extended cockpit for your feet, you won’t miss out on the features found with a traditional hard shell touring kayak.

Recreational kayaks are one of the most versatile types of kayaks to take out on the water. The world of inflatables acknowledges this and delivers an array of recreational Inflatables to choose from.

Inflatables like the AdvancedFrame Inflatable Kayak give you the experience found with recreational hardshell kayaks. What makes this model great is unlike most other inflatable kayaks, the AdvancedFrame allows you to sit in the cockpit giving you the real sense that you’re in a hard shell.

One of the advantages of inflatables is the versatility they offer. There are so many different inflatable hybrid kayaks that are emerging in the kayaking world.

Hybrid kayaks allow you to swap between a kayak construction and a stand up paddle board construction. Versatility like this allows you to use your inflatable in more ways than one.

Also read: Do inflatable kayaks need to be registered?

While we’ve mentioned a couple great boats so far, there are certainly some inflatable brands that stand out more than others. Here  are three of my favorite brands that offer exceptional inflatable kayaks.

Sea Eagle Inflatables have been around since 1968. This family owned company specializes in Inflatables and offers everything from inflatable kayaks, canoes, boards, and boats. They also have an exceptional lineup of inflatable gear and accessories that will fit whatever type of kayaking adventure you’re looking for.

Intex is one of the leading names in the world of inflatables. They have been around for 50 years and although they specialize in more things than just kayaks, their inflatable kayaks speak to the brand’s quality.

Intex offers an array of quality built, sports kayaks and inflatable boats. Their boats are geared more towards recreational use, and are great for first time kayakers looking to get started in the world of inflatables.

Bote Inflatables are perhaps one of this decade’s most sought after inflatable brands. Bote inflatables stand out not because of their incredibly sleek and stylish kayak designs, but because  of their impressive drop stitch construction.

Bote boards and kayaks are the perfect types of inflatables for people who really like versatility out on the water and want a well built hybrid boat.

Is an Inflatable Kayak Right for You?

If you’re someone who really loves getting out on the water but can’t quite commit to a hard shell just yet, then you may want to consider an inflatable. Whether you opt for a solo kayak or a tandem, inflatables offer an incredible benefit of being able to fold up and pack down easily.

Plus you don’t need a roof rack, a truck bed, or any other gear to tote your inflatable around. Overall, inflatables give you all the benefits of a hardshell without the nuisance associated with them.