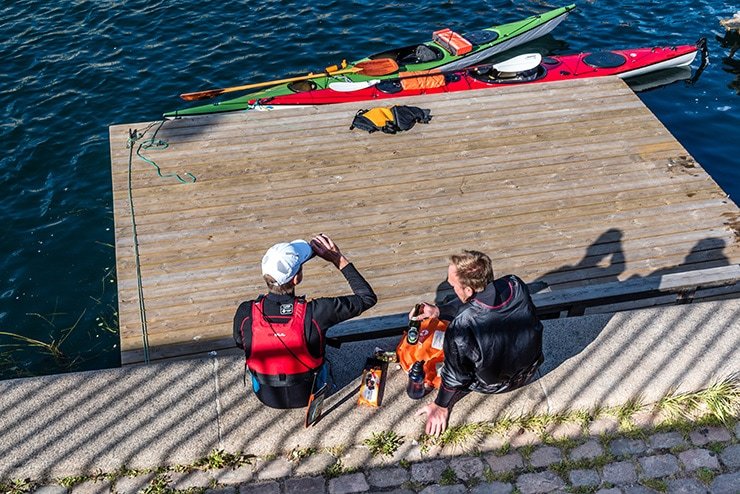 While most of us may consider kayaking something fun to do in our leisure time, or a hobby to keep us fit, what happens if you add alcohol into the mix? Can you get a DUI on a kayak and what sort of legal trouble can you face?

You can get a DUI (driving under the influence of alcohol) on a kayak. Different states have different thresholds on what constitutes a DUI but kayaks are considered a vessel of transportation and piloting one while consuming alcohol can get you in legal trouble in all states. This article will explain everything you need to know.

Can You Drink While Kayaking?

In all states of America, it is illegal to operate a boat while drinking. There’s been a large crackdown by law enforcement agencies due to the prevalence of fatal boating accidents and alcohol (the coast guard reported that around 19 percent of them involved alcohol in 2018).

Boating laws in the US are fairly consistent, but enforcement can be down to the police officers involved and which state you’re in. Some stick to predefined blood alcohol concentration measurements and others may issue fines if they see the kayak operator drinking alcohol.

How about drinking on the shore before you kayak? That depends – if you’ve consumed several beverages within an hour then that will most likely put you over the legal limits and this makes you liable.

If you have had an alcoholic beverage and you’re concerned, then it might be best to wait an hour before you go on the water.

Why Is Drinking While Kayaking Considered a Problem?

Alcohol affects you in various ways, but its primary concern is how it alters your nervous system. It acts as a depressant (it slows you down) which can affect reaction time, balance, and judgment.

All of the ways that alcohol affects driving performance in a vehicle on land also apply to watercraft. Kayaks in particular can sometimes be slower to manoeuver or get out of trouble, and alcohol alters your depth perception. When you add all this up, you can see why authorities are taking a tougher stance on alcohol consumption while kayaking.

Consuming alcoholic beverages and becoming intoxicated is likely to lead to boating injuries and damage to either your vessel or other boats on the water.  Further dangers can arise when this happens in cold water – where capsizing carries an extra risk (in the form of shock and hypothermia).

What Happens if You’re Caught Drinking Alcohol on a Kayak?

Punishments vary by state but not so significantly that someone can get away with being drunk on a kayak.

While there is some interpretation of the laws governing drinking and differences between a motorized boat and non-motorized water vessels there are some fairly consistent punishments:

The same laws apply across all states – punishments do very but practically every state issues large fines and jail time. They may revoke your capacity to operate a kayak and require you to attend safety courses. Some states may also require community service.

Some legal information for the various states and some minimum penalties can be found here. Also, be aware that BUI penalties for Canadians are similar to the states – and they are also not tolerant of being over the legal limit. The Canadian Red Cross states that alcohol is a factor in as many as 40 percent of boating fatalities.

Canadian penalties for breaking the law include fines of around $600 and up to 90 days in jail.

What Is the Difference Between a DUI and a BUI?

In essence, they are almost the same thing – the only difference is the type of vehicle (or watercraft) involved.

Some law enforcement professionals may issue a DUI charge for operating a watercraft while drunk, while others call it a BUI or BWI (boating while intoxicated). That said, DUI laws are not much different from a BUI and they are both classed as impaired operation offenses.

Can Passengers Drink Alcohol on a Kayak?

Whether or not a passenger can drink depends entirely upon which state you’re in. Some states are fine with passengers consuming alcohol, but if someone is intoxicated and their drunken behavior distracts the operator then the passenger is likely to be charged with disorderly behavior.

Passenger alcohol consumption depends entirely upon how states govern their laws around alcohol in general. If it’s prohibited to drink booze in a public space then it won’t be allowed on a public waterway either.

If you’re a passenger on a boat it’s best to familiarise yourself with the local criminal code around alcohol. Intoxication or being over legal limits as a passenger may be a problem but it can come down entirely to the individual law enforcement that you’re dealing with.

What Blood Alcohol Content Level Is Considered Over the Limit?

In the majority of US states, a blood alcohol content of over 0.08 is considered over the limit although this does vary in some states:

It’s very hard to figure out what your level of blood alcohol content is – it depends on weight, metabolism, age, genetics, and a host of other factors. It doesn’t matter if you don’t feel buzzed or tipsy – if law enforcement catches you drinking and you’re over the limit then you could face criminal charges.

Can You Get a BUI on a Private Lake or Pond?

This is another “it depends” as the BUI laws across many states don’t mention whether the laws apply to public or private property. However, it’s a safe bet that if someone was found boating under the influence and it caused harm or injury then the law still applies.

While it may not be as easy for law enforcement to enforce the laws on private property it can still happen. It’s hard to say exactly what every state’s law is here without poring through volumes of legal text, but in the majority of cases, these laws apply statewide (which means that it doesn’t matter if you’re boating under the influence on a public or private lake).

Will a BUI on a Kayak Affect Your Driver’s License?

The severity of this depends on the state if there was anyone placed in unnecessary danger or if there were any other offenses committed.

The states where a BUI can affect your driver’s license include:

If you’re stopped by law enforcement authorities who suspect you of consuming alcohol while kayaking then the best thing you can do is stay calm and be courteous.

The fact is, sometimes people do have a couple of drinks – and if you comply with authorities, you’re not over the limit, and any alcohol you consumed prior to operating the kayak is not affecting you then you’re most likely going to be ok. But, nobody can guarantee this.

However, if you are over the limit then it’s the same as driving over the limit, you are breaking the law. If this is something that concerns you then you should seek legal information – local and state BUI laws are complex in this regard.

How to Avoid Getting a BUI on a Kayak

The simplest way to avoid getting a BUI is to not drink in the first place – either before, or during, wait until after you’ve finished kayaking before you drink any alcohol at all. If you do consume alcohol before you plan to go kayaking then your best option is to wait a few hours before you go on the water.

Kayaking has become increasingly popular and law enforcement isn’t tolerant of anyone boating under the influence. It’s easy to underestimate just how much alcohol can affect your ability to pilot a water vessel.

So, can you get a DUI on a kayak? Yes, very much so, and most law enforcement is not pulling any punches either. There are various state and local laws that determine punishments and fines for a DUI and it’s definitely not worth the potential legal trouble!

We hope you enjoyed this article and please comment or share if the information here has been of any use to you.