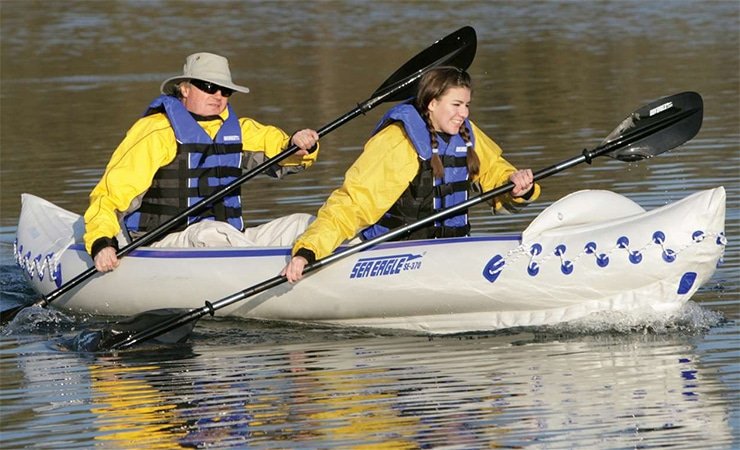 So you want your own kayak, but you’re not sure if inflatables are the way to go. Inflatable technology has evolved so much over the past couple of years that inflatable kayaks provide a genuine alternative to hard-shells, while being easier to store and transport too.

Inflatable kayaks are extremely rigid, safe, and absolutely fun to explore with. Let’s take a close look at some pros and cons of owning an inflatable kayak.

Benefits of an Inflatable Kayak

These aren’t just any old pool toys. Inflatable kayaks offer a great alternative option for people who do not have the space for a hard shell kayak.

They also offer other benefits too. Here are just a couple of reasons why this type of watercraft might be best for you.

A tandem hard shell kayak can especially be heavy, but a tandem inflatable will stick around the 30-pound range.

The biggest advantage when it comes to weight is when you pack your kayak down. It’s a lot easier to tote around a neatly packed 30 pound inflatable than it is a lightweight hardshell kayak that is long and awkward to lift.

ALSO READ: How do you launch an inflatable kayak?

Perhaps the biggest advantage of an inflatable is that they are easy to tote around. With a traditional kayak, you’ll need a roof rack or truck bed to transport it to your kayaking location.

Inflatables remove all that headache. Most inflatables fit neatly into a compact carrying bag. These bags can easily be stored in the trunk of even the smallest car. You can throw the pack in the back seat as well without issue.

As inflatable designs advances, so does the way users are meant to tote them around. For example, the Sevylor Quikpak K1 offers one of the best constructions for an easy to tote inflatable. Their design features a backpack-style bag that quickly and easily unzips and transforms into the deflated kayak.

Storage Is a Breeze

Just as it is easy to transport an inflatable, it is even easier to store.

Traditional hard shell kayaks require a garage, basement, or shed for proper storage. They require space, and you can’t simply store them outside because, over time, the elements can cause damage to them.

If you’re limited on space, an inflatable is super handy. You can pack up and store your inflatable kayak almost anywhere in your home. They come packed in a nifty storage bag that is easy to store in a closet, under the stairs, or even under your bed.

Hard shell kayaks can run you several hundred bucks. And while it can be a good investment if you have the means to tote it around and store it properly, this might not be feasible for everyone.

Inflatables are super versatile, with an equally attractive price point in comparison to their hard shell counterparts. The best type of inflatables will usually run just a couple hundred dollars cheaper than your hard shell kayaks.

Believe it or not, inflatables are incredibly safe. Novice kayakers tend to find it nerve-wracking to think that an inflation chamber is keeping you afloat and one simple puncture can take you down.

The reality is, however, that the best inflatables are made out of multiple air chambers. Even if you sustained a puncture, The other chambers will keep you afloat so that you can keep paddling back to shore.

With a hard shell, that’s not always the case. While hard shell kayaks are incredibly durable and don’t get punctured easily, one puncture is all it takes for you to start taking on water.

Plus with all the latest advancements in inflatable watercraft safety including durable material and stellar first aid kits, there isn’t much room to question their safety.

Inflatable Kayaks Are Durable and Stable

Inflatables have come so far from their counterparts in the early days. Today’s Inflatables feature some of the best construction materials. Materials including PVC coated with nylon or polyester, hypalon, and nitrylon – a durable rubber are behind some of the leading quality constructed inflatable kayaks.

The shape of an inflatable kayak also helps with its stability. Inflatables tend to have a flatter hull, allowing them to offer more stability than hard shells would. Even inflatables that have V-shaped bottoms will typically have a wider base and optimal buoyancy that takes away instability.

Inflation constructions such as I-beam floors and drop stitch air chambers have also changed the game. The type of material used and the way it’s inflated have all contributed to more durable and stable inflatables.

Multiple materials and construction options offer a wide variety of inflatables, with unique design features  You can shop for an inflatable kayak specifically designed for fishing, touring, white rapids, and even sea kayaking.

What Are the Drawbacks of an Inflatable Kayak?

Inflatables are not without their drawbacks. As with any type of watercraft, by their very nature, inflatables have a few things that you simply can’t avoid.

Luckily, for kayakers who are looking for versatility, storage, and ease of use, these drawbacks typically aren’t a deal-breaker. Here’s what you can expect to deal with if you have an inflatable.

Inflatables Can Get Punctured

Yes, inflatables can get punctured. The good news is, the puncture does not mean the end of your Inflatables life. Every inflatable kayak will come with some sort of repair kit and patch.

Depending on the type of inflatable you have, and the material it’s made out of will determine how well the patch will actually hold. For example, punctures on a nitrylon inflatables are much easier to repair than punctures on a PVC-constructed inflatables.

Packing up and Inflatable Kayak Can Be Tricky

While your inflatable kayak can pack down to a really compact size, chances are you are going to struggle the first couple of times you pack it up.

It’s not just folding up the kayak that can be a learning curve. Learning how to properly pack it away can be a little more time consuming than you might imagine.

If you have hit muddy ground, be sure to rinse off the mud as well. For more stubborn stains, you can use a mild soapy solution to clean it off.

After you clean your boat’s surface, dry it off completely. Any leftover water can allow mildew or mold to grow.

Pack and store your inflatable kayak in its carrying bag once it is completely dried, then store it in a cool space. Be sure to keep it out of the sun and away from the elements.

Control and Handling Can Be Tricky

If it’s your first time using an inflatable kayak, then you’ll find there’s a bit of a learning curve. Most inflatable kayaks sit high on the water because of the buoyancy provided by the multiple chambers. Because of this, you’ll typically find that you’ll paddle higher than you would in a traditional hard shell kayak.

Inflatables tend to be a lot slower than hardshells too. If you have skegs and fins on the bottom of your inflatable kayak this can help with handling.

But generally, unless your inflatable is tricked out with a V-shaped bottom or rubberized keel in the front, it will take you a little bit of time to get used to paddling and handling.

If you’ve ever taken out an inflatable kayak, you’ll know that they can be pretty sensitive to windy conditions. Because your boat is filled with air, it’s obviously not as heavy as a traditional hard shell would be. Even if there’s just a little bit of wind outside, you’ll likely feel your kayak battling against it.

High winds can also cause choppy waves. Inflatable kayaks don’t do a great job cutting through these types of waves, and you’ll likely feel each one! While this is an issue all inflatables bring with them, practice makes perfect. The more you get comfortable with inflatable boats, the easier it will be for you to kayak in windy conditions.

Inflating and Deflating Your Kayak Can Be Tedious

Inflating and deflating your kayak can be a bit tedious. While most inflatables typically inflate in about 10 minutes, this process can easily take longer. Dealing with issues like trying to find the right inflation valve, measuring the PSI, and inflating additional accessories like seats and footrests can all add up to a tedious process.

If you’re not familiar with inflating and deflating a kayak, then it can take you even more time until you get used to it. One way to help make the process go a lot smoother is by swapping out your included pump for an electric one.

Many inflatable kayaks come with a foot or hand pedal. While these pumps can get the job done, an electric pump makes the process a whole lot easier.

Is an Inflatable Kayak Right for You?

If you’re someone who loves going out on the water but doesn’t necessarily have the right gear associated with kayak ownership, then an inflatable might be for you.

Consider an Inflatable if the Following Describes You:

With so many awesome inflatable kayak options on the market, you’re bound to find an inflatable that fits your needs. The best part is that you won’t need to invest any additional money on extra accessories the way you would if you purchase a traditional hardshell.

Besides the basic practical benefits to investing in an inflatable, there are so many other

reasons why inflatable kayaks are the way to go.

Has this article convinced you that an inflatable might be right for you? I’d love to hear your thoughts in the comments section below!