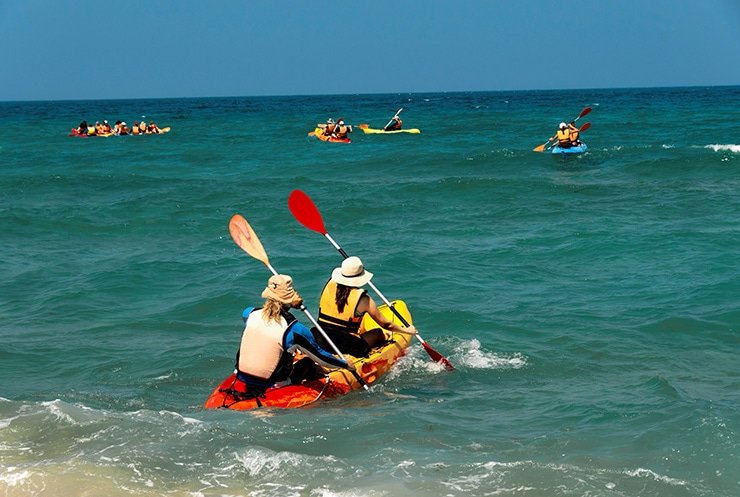 Kayaking went from being a means of transport in the ancient world to one of the most popular water activities today. But is kayaking a sport?.

People get into kayaking for many different reasons. Some use a kayak to cruise leisurely on a beautiful sunny day and others to go fishing in spots where big boats can’t reach. It’s a nice easy exercise that anyone can enjoy, regardless of age or fitness level.

But other than being a nice casual activity, and in answer to this article title’s question – yes, kayaking is a sport. Competitive kayaking has been around for a while and it’s quite popular too.

So if you’ve been thinking about taking kayaking to the next level, here’s everything you need to know.

History of Kayaking as a Sport

Ancient kayaks were made using animal skin stretched on a wood or animal bone frame. They were used for hunting and transport.

People started kayaking for sport somewhere in the late 1800s. John MacGregor, known by some as the father of the kayak, built his own kayak and used it to tour Europe. He even tried paddling rapids with it.

Around this time, Europeans started using the kayak for sport, exploring the icy waters of the North and South Poles. With time, other kayaking disciplines were born, such as whitewater kayaking.

One of the first people to produce kayaks for sport on a large scale was Hans Klepper. It was a folding kayak and he called it Delphin.

Other manufacturers soon started making their own kayaks too, making the sport even more popular.

In the 1900s, sea kayaking was starting to gain traction*, with more people attempting to paddle across the ocean for exploration purposes.

The kayak finally made its way into the United States. It was first used competitively in the National Whitewater Championship held in Maine in 1940.

Read more about the history of kayaking.

Is Kayaking an Olympic Sport?

Yes, kayaking is an Olympic Sport.

It finally became a medal sport for men in the Berlin 1936 Olympics, with 20 nations competing in 9 canoe/kayak events. It wasn’t until the London 1948 Olympics that women first competed, and it was only in the K1500m class.

So now there are 12 kayaking events in the Olympics, 6 men’s and 6 women’s. Extreme kayaking will be making a debut in the Paris 2024 Olympics.

How Long Has Kayaking Been in the Olympics?

Kayaking has been in the Olympics for about 86 years. It was first included as a medal sport in 1936.

Kayaking for women has been in the Olympics for 74 years. They were first allowed to compete in 1948.

Types of Kayaking Sports in the Olympics

Kayaking as an Olympic sport has changed significantly over the years. This has a lot to do with the changing boat technology and the changing demands of the audience.

Paddlers in the Olympics compete in two canoe and kayak disciplines. There’s the canoe sprint or flatwater kayak racing and slalom racing.

ALSO READ: Canoe Vs Kayak: The Pros and Cons

Canoe/Kayak Slalom in the Olympics

The kayak slalom competitive sport involves navigating rough waters with your kayak in river rapids as fast as possible.

The boats used for slalom kayaking were heavy, weighing as much as 65 pounds. But when manufacturers started using carbon fiber and kevlar to make the boards the International Canoe Federation reduced the size.

In the Olympics, a paddler has to complete two runs, where the faster run is the qualifying result.

Canoe sprint became an official Olympic sport in the 1936 Olympics in Berlin.

The primary rule is that the fastest boat wins. It’s done on calm water and , like canoe slalom, includes both canoe boats and kayaks.

There are three categories and competitors can race as individuals, in pairs, or four-person teams.

Race distances for canoe sprint have been reduced over time to make the events more exciting. There was a 200-meter sprint for the first time in the 2012 London Olympics.

Is Kayaking an Extreme Sport?

Kayaking can be an extreme sport.

You can customize it according to your needs. For instance,  recreational kayaking is an easy type of kayaking that anyone can take part in, including kids. Sea kayaking involves paddling the open water and it can be a little tough with high waves, strong winds, and stronger currents.

There’s also surf kayaking where you catch waves using a kayak and it’s pretty much as extreme as normal surfing.

Class I rivers are easy and predictable–ideal for beginners to learn. But as you get to Class III through VI, the level of difficulty goes up. The water becomes more unpredictable and harder to navigate.

Is Kayaking a Team Sport?

Kayaking can be an individual sport or a team sport. In the Olympics, paddlers can race as individuals, a pair, or a team of four.

Besides, there are kayaks designed to be paddled by more than one paddler.

Is kayaking a sport? Yes, kayaking is a sport.

People started using kayaks for sport somewhere in the 1800s.

Competitive kayaking is not a new concept as there are tons of sporting events at regional, national, and international levels all over the world.

In 1924 kayaking made an appearance as a demonstration sport in the Paris Olympics. It later became an official Olympic sport in 1936.