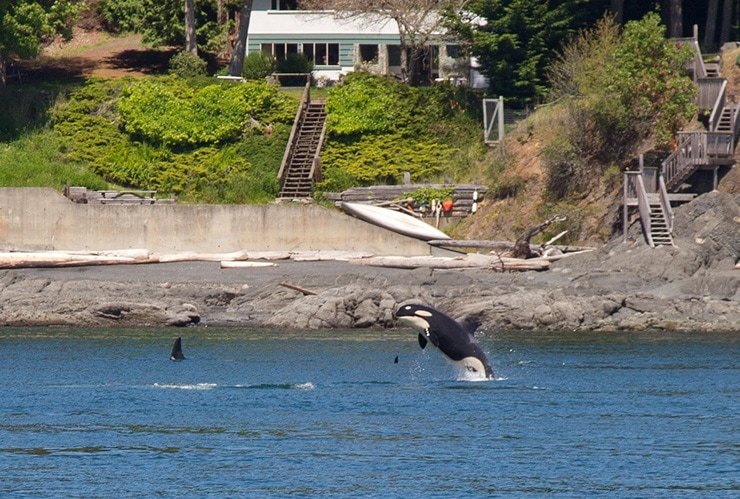 Did you know that the orca is one of the fastest marine animals on the planet? This huge mammal can weigh up to 6 tonnes and is capable of swimming at a speed of 34 miles per hour!

Orcas, also known as killer whales, are members of the dolphin family. They are as fascinating as they are big. Kayaking alongside them is an intriguing experience. But when it comes to wild animals, you need to exercise caution, both for your safety, and theirs.

However, learning how to interact with them is still important. So here’s all you need to know about orca whales and kayakers.

Is It Dangerous to Kayak with Orcas?

Kayaking with orcas is not dangerous because, as mentioned, they don’t go out of their way to hurt kayakers.

Although orcas are called killer whales–a name they got from ancient sailors–they are actually quite friendly with humans. They can swim towards you because they’re curious, or they just enjoy human interaction, but that’s all they’ll do.

A killer whale is also a highly intelligent animal and it will be aware of you and your kayak while in the water.

These majestic marine mammals eat fish, sea lions, seals, and other marine mammals. They’re smart enough to know that you’re not part of their natural diet.

Some marine life experts claim that orcas will only eat what their mothers taught them to eat. Others say that killer whales wouldn’t harm other creatures that they consider intelligent.

Whatever the case may be, there are no records of orca whales hunting and killing humans in the wild.

Do Orcas Mess with Kayakers?

No, orcas don’t mess with kayakers.

They know you’re not part of their diet and do not intend to harm you.  People have been paddling alongside orcas for years and it’s regarded as one of the best kayaking experiences!

Sometimes, they even seem to enjoy being around humans. They’ll come close out of curiosity but they won’t mess with you.

That said, they could still harm you by accident.

Adult orcas are about 20 feet long and can weigh over 10,000 pounds. Being dangerously close to such a huge animal obviously has risks. They could knock your kayak over accidentally, especially if they’re not aware of you, hurting you in the process.

Has an Orca Ever Attacked a Kayak?

No, there is no record of a killer whale attacking a kayak.

Kayakers have been sharing the ocean with these majestic dolphins for years. Never once has an orca whale attacked a kayak or even mistaken it for food.

Killer whales are smart and have remarkable eyesight. They’re also exceptionally agile. One may come extremely close to your kayak and still not bump into you. They also aren’t aggressive. .

There have been many close encounters between kayakers and orcas and none of them have ended badly. In the video below you can see how close the orcas come to the kayakers and they don’t bump into them.

Can My Kayak Harm an Orca Whale?

This is a good question to ask because when sea kayaking, you’re in the orcas’ natural habitat. You don’t want them to harm you but you should also be careful not to harm them.

Your kayak cannot harm an orca whale. Kayaks are environmentally friendly and there’s no way for them to hurt a killer whale.

What To Do If You Come Across an Orca

First, stay calm. That’s hard to do because these mammals are huge and magnificent creatures. It’s normal to be scared and excited at the same time.

But don’t make any sudden movements. Instead, relax and enjoy the sight until the orcas move on.

If you frantically paddle away they won’t chase you thinking that you’re food. But you’ll miss the rewarding opportunity of watching them in their natural habitat.

Don’t paddle toward the orcas because you don’t want to disrupt their path or routine. Keep your distance and let them go on about their business. You can paddle alongside them if they’re moving but don’t cut off their path or get too close.

Some studies have shown that water vessels can interfere with the behavior of whales. This may be a contributing factor to their declining population. It’s possible that these vessels interfere with their feeding, resting, and other functions.

Respecting marine animals and their home is good for their environment. It also ensures that future generations will enjoy kayaking with orcas too!

What Do I Do If Orca Whales Surround My Kayak?

Remain calm and enjoy the show.

Encountering orca pods while kayaking can be quite the experience, and we’ve already established that they don’t eat or attack humans. If anything, they’re friendly. These marine mammals are also super agile and it’s unlikely that they’ll bump into your kayak accidentally.

So just stay put and enjoy the intimate wildlife experience because it’s truly magical. They may go around you or go under your kayak but they won’t attack you.

How to Interact with Orcas Responsibly

The first and most important thing is to always keep a respectful distance when you encounter orcas in the wild. They may not be aggressive but their size alone can be a threat even when they’re trying to be playful.

You may be tempted to get closer for a better shot to show your Instagram followers, but don’t give in to that temptation. And don’t make any sudden movements or noise. Stop paddling and enjoy the experience.

If you’re paddling as a group, get close together when you see a group of killer whales. This creates fewer obstacles for the orcas to maneuver around.

Another way to be responsible is to not get in their way. Always stop when you see orca whales and let them choose what to do. Use this as an opportunity to observe their beautiful swimming skills and listen to their magical songs. Savor the moment because it will be a kayaking trip to remember.

Do not, by any means, try to lure them with food. This applies to wildlife in general. You don’t want wild animals associating kayakers with food.

Lastly, remember to leave no trace. Don’t leave any evidence of your kayaking trip behind. If you have any trash, maybe from unwrapping snacks, pack it and dispose of it properly once you get back on land.

Can You Touch an Orca While Kayaking?

No, you shouldn’t touch an orca while kayaking. The only thing you should do is watch them from a safe distance.

When you get too close to orcas you’ll be disturbing them and they may be forced to change their patterns. Since you’re in their home, you should try to be respectful and not touch them.

You could also get hurt. Paddling into the middle of a group of killer whales can be dangerous, even though they don’t attack humans.

Laws About Interacting with Killer Whales for Kayakers

Laws about interacting with orca whales vary from state to state.

In Washington, vessels are prohibited from approaching orcas within 200 yards. You’re also not allowed to park in their path.

According to the marine life viewing guidelines, you’re not allowed to approach or touch marine species protected by the Marine Mammal Protection Act and the Endangered Species Act.

You, therefore, can’t touch them, pursue them, disturb their path, or even try to elicit a reaction from them.

Where Is the Best Place to Kayak with Orcas?

Good whale-watching kayak tours aren’t hard to find, it just depends on where you want to go kayaking.

San Juan Islands in Washington is a fantastic place to sea kayak with orcas. The area is home to magnificent killer whales and they can be spotted all year round. It’s a popular kayaking destination and you have a high chance of seeing orca whales.

Johnstone Strait in British Columbia is prime orca territory. You could say that it’s the best place in the world to go kayaking with killer whales. There’s a large orca whale population there which means it’s almost a guarantee that you’ll spot a few.

Is It Safe to Take Kids Kayaking with Orcas?

Yes, you can take your kids on a kayaking adventure to watch orcas in the wild. However, this means that you’ll be responsible for more than just yourself.

Your best option would be to find a local kayak tour company. They will provide you with the necessary gear and you’ll have an expert accompanying you. You’ll also be kayaking in groups and this is much safer.

I would not recommend going on your own because the water and weather can be unpredictable. When it comes to water activities, safety should always be your top priority.

Kayaking with orcas is safe but you have to be careful around them for your safety and theirs too.

Killer whales are friendly with humans and they don’t attack kayakers. But they are huge and being too close can be dangerous.

Getting too close to orca whales disturbs them and causes them to change their behavior. It’s important to respect marine life and observe the animals from a distance.

If you spot orcas near you, stop paddling and watch until they swim away. Don’t panic if they come close as they’ll most likely swim around you or under your kayak and retreat. Do your best to maintain a safe distance and don’t cut off their path.