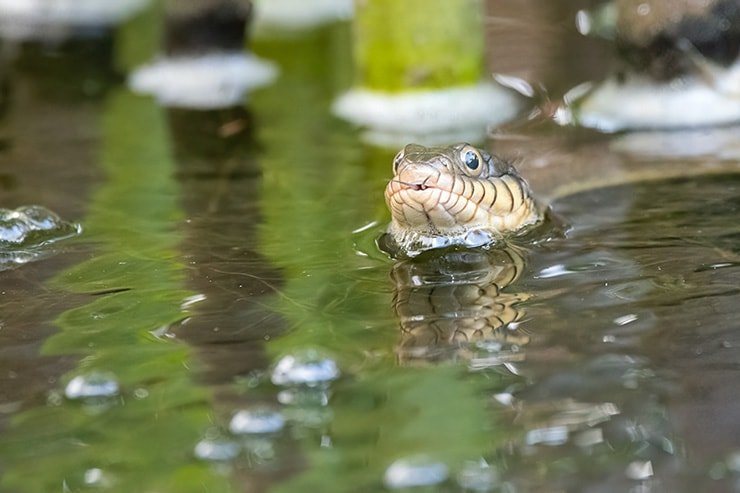 Kayaking is fun, no doubt, but it can be scary sometimes. Unless you’re kayaking in a pool, there’s always the chance of encountering wildlife.

Some animals, like turtles and dolphins, can make your paddling experience truly magical. But others are dangerous and you can only hope to never meet them. Or you only prefer to observe them from a safe distance.

For many people, snakes are some of the scariest animals in nature. The mere thought of one falling into your kayak sends a chill down your spine. As a kayaker, you need to know how to interact with any animals you may come across, including snakes. This is both for your safety and theirs.

So let’s talk about what to do if you encounter a snake while kayaking.

How to Deal with a Snake While Kayaking

If you ever see a snake while paddling on your kayak, here’s what you should do.

Don’t Get Too Close

Most people will stay away when they spot a snake. But there are those who find them interesting and they might try to get close for whatever reason. This is a bad idea, just as is the case with every other wild animal.

The obvious reason is that you might get bit.

A bite from a venomous snake can hurt you in various ways–from local tissue damage to interfering with your heart or nervous system. Even with a non-venomous snake, you could still end up with an infected wound.

Besides, misidentification of snakes is common. You may think you’re dealing with a harmless snake only to find out it’s not, when it’s too late.

If you see a snake while paddling, let it be. You can try to identify it from a distance and take pictures if you want to, but don’t get any close. Have some respect for nature and leave wild animals alone, it’s the best way. Trust me.

Try to Scare It Away (if Needed)

Most snakes aren’t aggressive and they are probably more scared of you than you are of them. So when they see you they’re more likely to get away.

However, sometimes a snake may swim towards your kayak and even try to get on. It’s more likely to happen if your kayak isn’t moving because snakes climb onto stuff like rocks and logs to sunbathe. As you can imagine, this is not a pleasant situation, especially for people who are afraid of snakes.

But as soon as you start moving the snake will turn away and leave you alone pretty quickly. If it doesn’t, scare it with your paddle or fishing pole if you’re kayak fishing and it will go away.

Paddle Away from the Snake

Another wise thing to do when you encounter a snake while kayaking is to paddle away from it. Resist the temptation to go closer and pick it up, especially if you can’t identify it.

Anytime you’re dealing with wildlife it’s best to observe from a safe distance. This way, you won’t disturb the animal and you’ll protect yourself from getting hurt.

Stay calm and paddle away slowly.

People who have a serious fear of snakes may be tempted to paddle away frantically. But you don’t want to do that. Your kayak will create an eddy and the snake might follow you–not because it’s interested in you but just because it’s the path of least resistance. And the faster you go, the easier you make it for the snake.

So even if you’re scared out of your wits, try to relax and paddle away calmly. Remember the snake wants nothing to do with you too.

Can A Snake Get Into My Kayak?

Unfortunately, yes. It’s possible for a snake to get into your kayak but it’s rare.

Snakes can get into your kayak by climbing onto the sides, through the scupper holes if you have a sit-on-top, or by dropping into your boat from a tree above.

Scary as this sounds, it isn’t common. The chances of a snake climbing onto your kayak while you’re paddling are extremely low. Your movement is enough to scare them away.

Tips for Kayaking Safely with Snakes

Most kayakers don’t have anything to worry about as far as snakes go. But if you’ll be kayaking in an area with a lot of snakes, you should be careful.

Watch Where You Launch and Exit the Water

Avoiding snakes while paddling isn’t hard. You can notice them before you get too close if you’re aware of your surroundings, and they will also get away from you fast.

But when you’re at the shore you have to be extra careful. It’s easy to miss a snake sunbathing at the shore or smaller snakes in shallow water.

Watch your feet and hands while putting in and taking out your kayak. You wouldn’t want to accidentally startle or anger a snake when you’re too close to it.

Research the Area and the Kind of Snakes Found There

Always research where you’ll be kayaking before you go. Find out whether there are snakes and what species you can expect to encounter. This way, you’ll be prepared and know how to handle the snakes you’ll come across.

For instance, you should know whether you’ll be meeting a lot of venomous snakes or harmless water snakes.

Some snakes you should be worried about include water moccasins or cottonmouth. They are native to southeastern states in the U.S.

Texas is probably the state with the highest number of snake species in the United States, with most of them being in the Central Texas region.

I recommend getting in touch with local kayakers when paddling in a new location. They may have encountered a few snakes during their expeditions and they can offer helpful information.

Be Careful When Paddling Under Trees

Snakes like to climb trees, which isn’t a nice thing to hear if you’re afraid of snakes. This is because the easiest way for a snake to end up in your kayak is by dropping from a tree.

If you’re at a river or lake with a lot of snakes, I recommend avoiding paddling under low-hanging branches as much as possible.

A snake in your kayak could cause you to panic and all common sense will be out of the window. And even a non-venomous water snake will bite if it feels threatened.

Getting bit by a snake is scary. Whether or not it’s dangerous depends on the type of snake that bit you. But either way, I would advise you to go to the emergency room immediately. Note that even harmless species like garter snakes can still give you a nasty infection so you shouldn’t wait to find out.

If you go on a multi-day kayaking trip in a snake-infested location, make sure there are people in your group who know enough about snakes. They should know the different species, which ones are venomous, and what to do if someone gets bit.

Bad first-aid is worse than no first-aid when it comes to snakebites. So it’s very important to have someone who knows what they’re doing.

Be Extra Careful When Paddling at Night

During the day, you might not have much trouble spotting and avoiding snakes in the water. This is not the case when it’s dark.

It’s recommended that you get out of the water when the sun starts to go down, just to be on the safe side.

It’s harder to see snakes at night and when you encounter one you won’t know what species you’re dealing with. So avoid paddling at night in areas where you are likely to encounter snakes.

I know it’s easy to get lost in your paddling session as you enjoy some fresh air and beautiful scenery. But don’t be too immersed in the experience that you can’t spot a water snake close to you.

It’s possible to accidentally pick a snake up with your paddle while paddling. One may also get into your kayak through scupper holes if you have a sit-on-top kayak. Then there’s the scary possibility of having a snake drop into your kayak from a hanging limb.

While these situations are rare, they’re not unheard of and the probability is higher in areas with many snakes.

Always keep an eye out for the reptiles so you can get out of their way.

Do Snakes Jump in Kayaks?

A snake jumping into your kayaks is highly unlikely because snakes will generally try to avoid humans. However, it is possible for one to fall into your kayak from a low-hanging branch.

What Should You Do If Snakes Get in Your Boat?

If you find a snake in your kayak you have multiple options.

The first option is to let it explore the kayak and leave on its own when it’s done. This is wise if you’re dealing with an aggressive and maybe venomous snake.

The other option is to try and scare it out of your kayak.

Many people have a crippling fear of snakes. This can be a problem if you want to kayak but live in an area with a lot of snakes.

However, you only need to know what to do if you encounter a snake and you’ll be safe. Most snakes are scared of humans and won’t even try to come near your kayak. They mainly eat small fish and other small animals.

Whenever you see a snake while paddling, keep a safe distance and never try to pick it up. You can observe and take pictures but don’t get close, especially if it’s a venomous snake. If one tries to come near you scare it away with your paddle.

If you’ll be paddling a place with snakes, avoid low-hanging branches as a snake could fall into your kayak. Be careful also not to pick one up with your paddle and remember they can get in through the scupper holes. These situations are rare, however.

Do your best to learn about the snakes in the area and you’ll be less afraid. If you get a snakebite, seek help immediately.